A flash of genius

So many people asked what kind of Photoshop action I used or what kind of postproduction secret recipe I have for images like this one:

The answer is none.

The magic is in the light.
If you are shooting in full daylight you have few options.

One of them is to use the sunlight as the main light. Here you are going to face some problems such has harsh light and strong shadow. Also, you may want to use sunscreen and sunglasses. Dont wear a black shirt.

A more interesting option would be to use the sun light as a kick light. In the picture above you can see the right side of brides face hit by the sun light. Without any other light source, the rest of the face would be underexposed (such as for the groom but usually no one cares about the groom).

Ok, nows the time to take your flash (sorry Americans, strobes are in discotheques only here) off camera and place it just outside the frame. The nearer to the subject the better, since the farther you put the flash, the smaller  it appears to the subject (hence the harsher the light).

You can help the whole thing putting an umbrella in front of the flash to soften the light.

Hey wait, the bride seems to be meters away from the camera (sorry Americans, we use this weird metrical system with multiples of ten) how do I drive the flash?

You do yourself a favor and buy a couple of FlexTT5 Pocketwizards. You will thank me later.

Well, now, you spent all money you were saving for that L glass for those Pocketsomething everyones talking about, you throw your flash off camera and even walk a few steps to put it away from the camera. You also borrow your wife white umbrella and stick it to the stand with some dutch tape. Would you just trust you camera light meter for the exposure?

Nope. You know the little dial on top of the camera? It can turn! You move it from P to M which, guess what, stands for Manual and choose the exposure yourself.

Expose for the sky and the background. Dont care about the groom (who cares after all?)

Now since you want to keep the groom out of focus (no one cares about him remember?) you have to keep the aperture quite open. This means that even if you are at ISO 100 you have to use a very fast shutter speed.

I know that somewhere on a shelf or in its original packaging your flash user manual says that if you use a flash the shutter speed is limited by the camera sync speed which, for most of modern DSLR is 1/250 sec. If you read the whole manual, you would have found that this is not exactly true since your flash can go in a mysterious mode called High Speed/FP flash sync. The new pocketwizards take this FP thing to the next level. You dont even have to touch anything on the flash to enter this mode, the PW does all by itself. The number of excuses for not using it is getting low

I told you you would have thank me: the PW does everything for you. Since they actually use the Canon ETTL-II system, you dont need to touch anything on the flash, just shoot a couple shots and I promise the third one will be it.

Take a look at the picture again and note that the body of the bride is turned toward the main light source and how the sun is sculpting her giving such a 3D appearance. Look at the light on the two sides of her arm.

Here are some behind the scene pictures. You can always find a very young aspiring photographer at weddings that is eager to help.

Then with a little help from my little friend:

A little crop and clone stamp after: 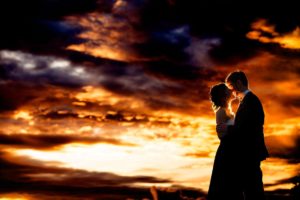 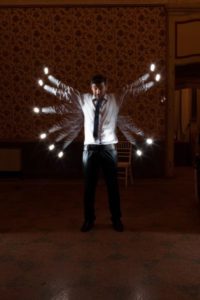 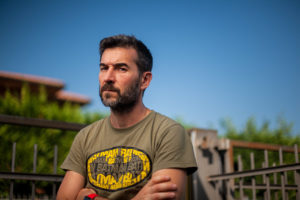